With our recent trip to NH to see friends and family for the holidays, we decided to take a road trip down to Saugus Massachusetts to have donuts and coffee and the "World Famous Kane's Donuts". Man, were we in for a treat!

We had heard about them on a TV show featuring the top 10 best fried foods on the Travel Channel and agreed that we HAD to go the next time we were in the area.

What a great atmosphere. The place is pretty small inside with about 4 tables and 6 bar stools at the counter. To say that the place was busy would be an understatement. Here is was mid-morning on a Monday and it was standing room only. We were lucky enough to grab a seat at the counter! We were there about 30 minutes and it was non-stop donut and coffee selling. Everyone had a huge smile on there face (the customers and the workers). It was just a nice friendly place to be while we gorged ourselves on donuts. Their prices are decent too. All around, a great deal.

They kept passing fresh donuts through the window and brewing fresh New England brand Sumatran whole bean coffee. You should have smelled the place!

So, we find our seat and order a donut each. My sister and I ordered Boston cream donuts, my son ordered a chocolate honey glazed and my wife got a chocolate frosted. As we took a bite of our poofy morsels, we said nothing and looked over at each other with an agreeing nod of approval thinking one thing, "YUUUUUUMMMMMMMMMMM!!!". DAMN was that good!

I sipped my coffee and was very surprised at how great it was. I'm a bit of a coffee snob and never have very high expectations when it comes to coffee, especially at a donut shop. But, yeah, it was amazing man. I looked around to investigate the coffee situation and noticed that they were using New England Sumatran whole bean coffee and grinding them to order. No pot stayed on the machine longer than about 2 minutes so we knew the coffee was fresh.

We chatted with the folks behind the counter and they were all very friendly. Apparently its run by the Kane family, and everyone that worked there (except the Latino girl in the back) were related some how.

We planned to take the train into Boston to find more good munchies to chew on. This man next to me, Jim was his name, drew out a very detailed map to the train station on a napkin for me and we had a great conversation about the place and the area. He told me that they make everything fresh every day and are famous for this huuuuge coffee roll (he pointed to a fresh basket of them as they walked by in one of the owners arms). I think they weighed like 2.5 pounds or something!

We got to the train and headed into Boston. We were in for a few more great treats! More on that later. 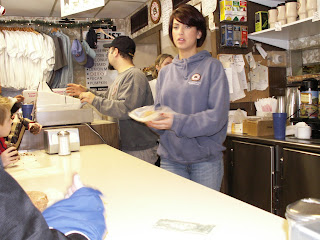 A match made in heaven :) 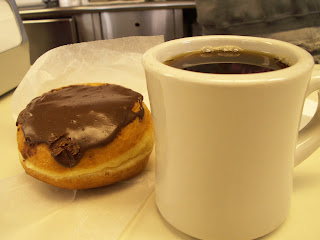 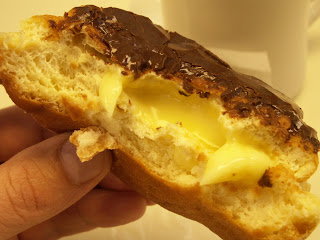 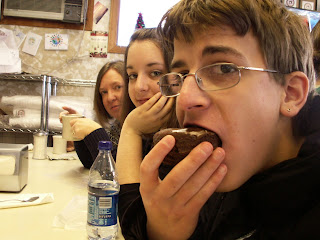 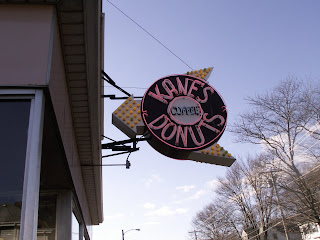 Thanks for the info!! I tried Kanes this weekend it was just heavenly! The coffee has got to be the best ever!!I was lucky enough to enjoy some hot honey dip donuts,I ate 3 of them and I could have had more!!I can't even describe how wonderful they were.The service was excellent one of the owners waited on me,she was so friendly and even her teenage children worked there, they were just as nice as their mom.It made me feel at home.I will definately go back often!!