Wow, what a journey! I'm half way to the goal of making it to my CEC (Certified Executive Chef) status. Today I had the pleasure of doing the cooking practical half of a two part testing session. Next week I will begin practicing and studying for the written part of the test. God willing, I pass, I should be certified officially by the middle of August, SAAAWEET! :)


This leg of the journey began two nights ago at the club where I had one of my associates help me pack up all the TONS of stuff I needed to bring with me. There's a picture below to show you what I mean. It's a great idea to stay organized when doing this test as it will be your downfall if your not.

I arrived in the afternoon yesterday in a town called Jamestown, NC, near Greensboro around 4:00, right before the night students arrived. I kinda had the place to myself. I dropped off and staged all my food and equipment at the test location kitchen at Guilford Technical College campus' Hospitality department. I was still missing a key ingredient though.

I decided not to buy lobsters, which is one of the required items for this test, until I arrived in town. I wanted to avoid killing them during the ride down (and, I live in a back woods red-neck infested town that wouldn't know what a live fresh lobster was if it jumped off the sign at that chain place everyone visits for the cheese biscuits!) Anyway, I would have much rather done that myself with my own knife (evil grimace). So, after calling no less than 8 stores, Super Wal-Mart prevails! (once again). So, off I went to get them. It was on the way to my hotel and not too far away, easy cheesy, right? (hmmph)

Well, after getting a parking ticket from the over achieving rent-a-cop/ campus security dude for parking at the loading dock and near a fire hydrant, losing my car keys and having the entire classroom and faculty hunting for them, only to find them in a students pocket! (long story but he thought they were his as he has a similar remote door lock, apparently), getting lost twice because google maps decided to suck that night, I arrived at this HUGE super Wal-mart and bought my victims with the help of a cute little Jamaican girl named "Welcome to Wal-mart" (her name tag was blank and she didn't seem to remember he own name, lol, sweet little Jamaicans, eh?).

ANYWAY!!! 45 dollars later (for two!), it was time to find my hotel. I ask an employee where so and so hotel was and he gave me PERFECT directions! Nope, too easy, I had to not trust this guy and start reading my Google maps sheet again (WTF?). To make a long story short, I ended up 20 miles out of my way and finally had to ask a trooper for directions. He got me back to the exact spot and with the exact directions as my Walmart buddy had told me in the first place, wow.

I check in to one of my favorite chain hotels, STARVING! All this stuff I just went through made me hungrier than a (insert stupid Larry the Cable Guy joke here). The dude behind the counter suggested I try this "Italian" place next door. "Here, have a coupon for a free appetizer." he said with glee. "Sure", I thought, I can walk next door, eat a decent meal and go to bed fuller than a tick :) Yeah!

Having forgot that I was VERRYY chafed from my long day and no corn starch in site, I John-Wayne walked my hungry ass to Villa Rosa. 4 cars in the parking lot (3 were employees), Frankie playing lightly on the outside speaker system and fake flowers all over the place, nice. I get my seat, the host was a cool dude. I decided on the calamari as my app (decent) and a chicken dish for dinner. After eating my wilted house salad with thinned out bleu cheese dressing, stale garlic bread and tough capon chicken breast covered in mop water and canned black nacho olives, I took my to go water and left. hey, it only cost me like 15 bucks with tip. Rachael would have been proud.

After a horrible nights sleep (I think all that worrying combined with the 3 red bulls and 2 venti Starbucks I had the day caught up to me, lol), I arrive at GTCC at around 7 am where they gave us an awesome continental style breakfast, nice. The chef gave out our competition times (mine was 11:30!) and we were off to the races. I'm kinda glad my time was 4 hours from then because I was a basket case with nerves and needed about that much time to calm down!

I watched my fellow chefs sweat through their paper hats, listened to the sizzles and the pan banging, smelled the smells of stress, was weird to be watching. I felt like I need to grab a pair of tongs and help out, or expedite or something! Ah, old habits die hard, eh?

Finally! My turn. Luckily, I was organized and mentally ready. I started on time and ended about 20 minutes early. Aside from a few minor infractions, I did really well. I felt like I was on my game! A nice redemption for falling on my face during my last two competitions! (for you few that are following along). I had the opportunity to practice these dishes three times before and it really paid off! I only used one chef hat! (Which means I didn't seat too much. Most of the time you could go through at least 3 during that amount of time).

Check out these pictures and WISH ME LUCK for the written test. I'll keep you posted. 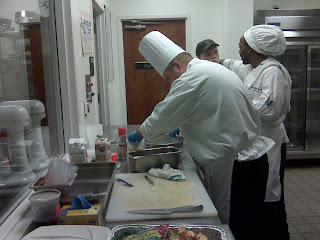 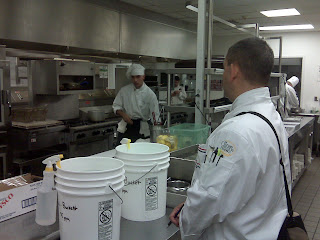 My Mise! This doesn't include the 3 sheet pans full of food that was in the cooler! 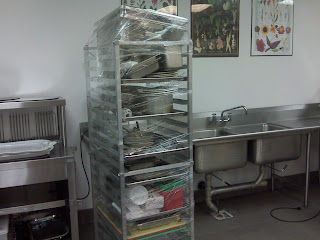 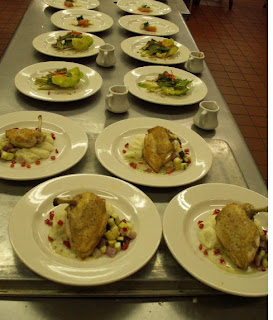 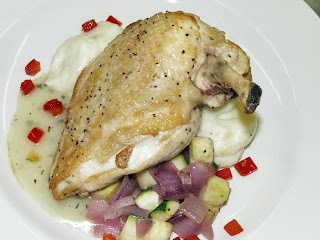 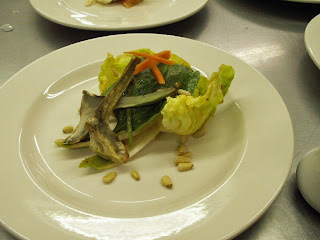 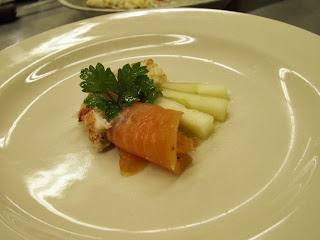 Another grand event offered by yours truly. I was asked to do a healthy cooking demonstration for a group of folks that work for a company (Pregel America) that makes the ingredients for the best gelato I've ever had the pleasure of eating! I mean, when I say the best, I mean, you will never eat anything so incredibly sensational in your life (unless you travel to Italy or something, but this has GOT to be at least as great as that). This plant is HUGE and very state of the art. It was very impressive to see this place and some of the stuff they are creating over there. Truly awesome.

Weekday Gourmet approached me with a need to teach this group how to make a couple healthy side items to accompany one of their "build your own" entrees. Check out their web site for more information.

We started off with a simple hummus with crispy baked wheat pita chips followed by a crispy locally organic vegetable side dish using REALLY fresh green beans and white/ red baby new potatoes. I tossed all that in a sherry vinaigrette and some fresh herbs for color contrast. The recipe is listed below along with a couple pictures of the event.

After my demo, one of the company chefs made this unbelievable strawberry rhubarb crumble that reminded me of New Hampshire in the spring time. It was a perfect end to a great night. 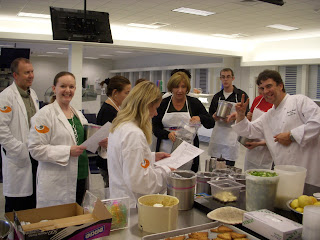 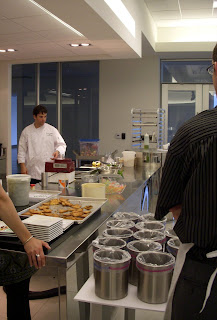 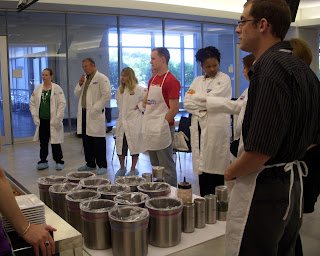 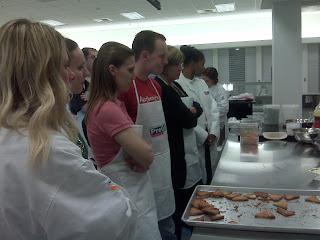 In a small bowl combine the oregano, lemon juice and zest, and white wine vinegar. Whisk in the
olive oil. Stir in the salt and pepper. Toss the warm vegetables with the herb vinaigrette. Serve
immediately.
Posted by Chef Bradley at 8:00 PM No comments:

Last night I had the opportunity to cook 4 out of 5 courses for a group of eight clients/ friends celebrating their neighbors 40th birthday.

What a great time! Not only did I have a blast cooking for these folks, but everyone seemed to have had a great time, which is always nice :)

The guests arrived at around 7:30 and were greeted by an artisan fruit and cheese platter with whole grain lavash, flat breads, crackers and spreads. Since it was such a beautiful night, the host insisted everyone eat outside on their heavily candle-lit veranda which just added ambiance to the evening. As they munched on the awesome array of fruit, cheese and crackers, I began the evening with course number one while explaining everything to everyone. The night progressed with another course, intermezzo, main course and, finally, dessert. I was full just watching everyone eat!

All ingredients were either local, organic or sustainable in one way or another. As most of you may know, I like to keep that in mind when planning my menus. It just makes things better, if you ask me.

Check out the menu and a few pictures below;

Apple cobbler with vanilla ice cream provided by the hostess. 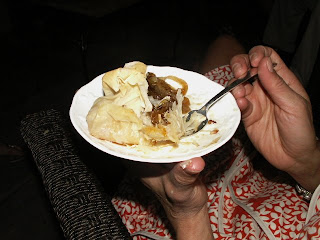 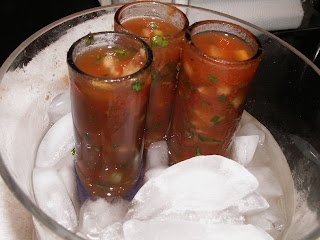 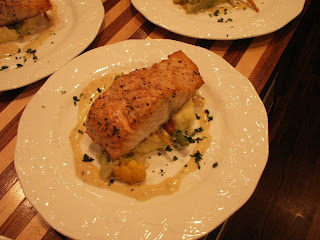 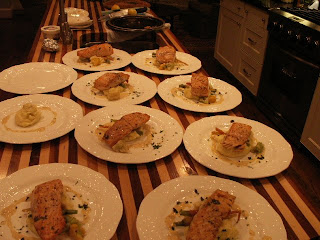 Posted by Chef Bradley at 7:28 PM No comments: