Back in the competition saddle after three long years...

Besides feeding people that love your food, one of the most rewarding things one can do as a professional chef is to partake in an American Culinary Federation (ACF) cooking competition. Days or even weeks of preparing yourself mentally, hours and hours of menu preparation, practice and eating to end up at the moment we hit start-time is second to none as far as I'm concerned. Yeah, work is work, but competing? THAT'S what's up. When you're working, for the most part, one can easily get into a rhythm and a groove and can soar by most days on just muscle memory and coffee. When you're the boss, you may not necessarily get to cook as much as you'd like or, when you DO get to cook, there's really no one staring over your shoulder pointing out your mistakes. When you are competing with and against your peers and being judged my Certified Master Chefs, the game changes; now one has to be on his/ her toes as if their career/ life depend on it! Ahh, so refreshing.

The competition event was at Skidmore College in Saratoga Springs, NY.

Among the many competition categories, this was a Four-Man "W" Mystery Basket category, which basically means "custom" category, or a category which is not necessarily listed on the ACF website.

There were 10 teams of four, each with different backgrounds and levels of expertise. There were corporate food service companies, country clubs, community college students and more competing which led to an amazing three-day event.

On the first night, which I was not able to attend, was just for eating, drinking and being merry. Personally, it was hard enough to get two days away from work let alone three, but I digress. The second night, they gave us our mystery "Market Basket" ingredients listed below:

How exciting! We were then given one hour to come up with a menu and were allowed to use a plethora of common pantry ingredients; spices, fresh herbs, seasonal produce, etcetera. The menu we came up with is below. We decided to go with a "Latin-Theme" because Nestle/ Minor was giving away a grand prize of a set of chefs knives.

Not only did we have to come up with a 3-course plated dinner, we had to come up with a fourth course; a buffet item for 10 people. This would end up being all of the competitors lunch so we could share each others food with each other and learn some new ideas.

After the menu was created and turned in to the judges, my teammates and I went to dinner for a couple hours and hashed out our game-plan. They picked each team out of a hat for start-times, ours was to be 6:30 am. Yikes! It took me four hours to drive from Manchester, NH to Saratoga Springs, NY after a really crazy week and even crazier day at work that day but I was so jacked up with adrenalin that I was just fine. As I've heard many times, there will be time to sleep when I'm dead ;-). So, after a terrible salad at a terrible restaurant, we headed to our hotels to get some much needed sleep. None of us slept well that night. I know, for me, since this was my first competition in over 3 years and I had never competed with anyone else on my team, and, the hotel beds are never comfortable, I may have gotten a total of three hours sleep that night. Thank you Starbucks! You saved me!

My team and I arrived a little early and were allowed to set up our stations 15 minutes before start-time. Crazy thing, we only had two 8-foot prep tables and four butane burners to work with! Yup, that's it, no stoves, no fryers, nothing but four cassette butane burners were allowed to cook on. This would keep the playing field level. Of course it had it's challenges but we are professionals! I mean, I once cooked for 16 doctors and pharmaceutical reps with nothing but a toaster oven, a saute pan and a stainless steel bowl! All you need, really, is heat and the will to succeed.

Once our start-time was in effect, we broke into our courses. Appetizer, cold soup and entree. Check out the menu, it's pretty amazing. Though I don't work for the University of Albany, my team did, I was just asked to join them. Thanks guys! Enjoy the pics below. More to come of the actual food soon. 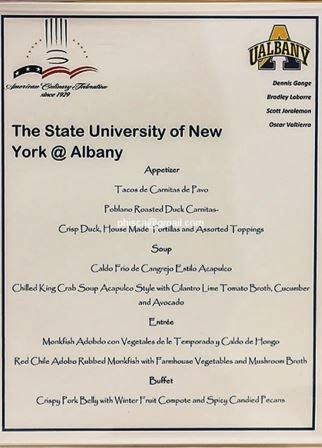 Butter-basted Latin seared Monk-fish and a picture of my good side :-P 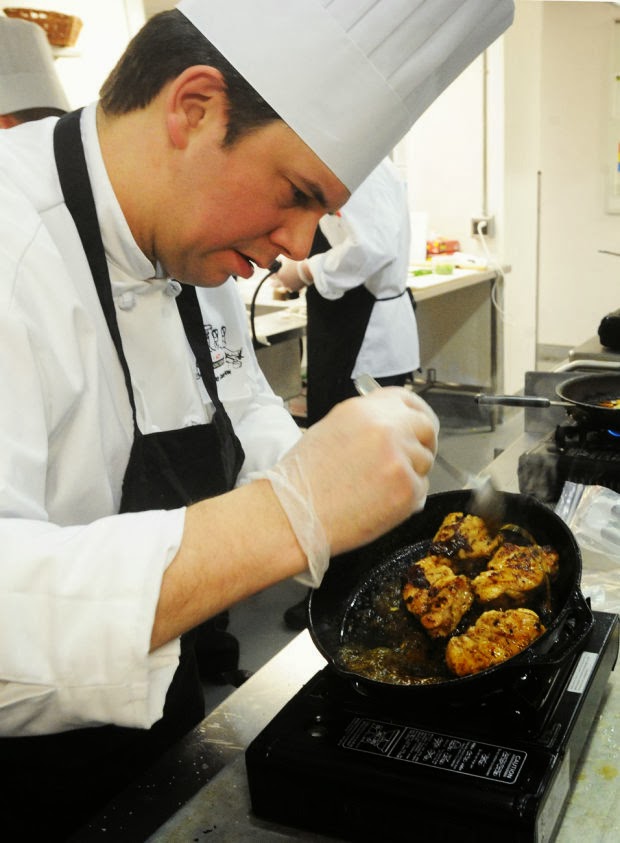 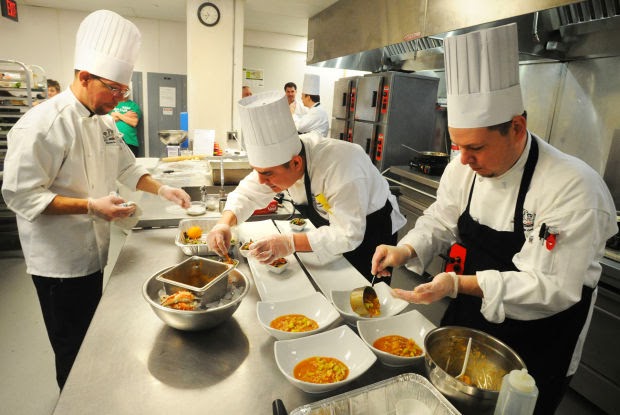 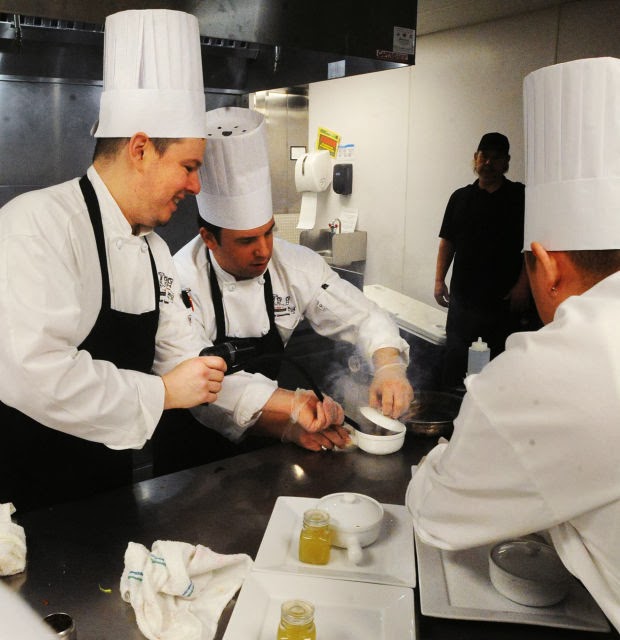 A little bit of chaos never hurt anyone! 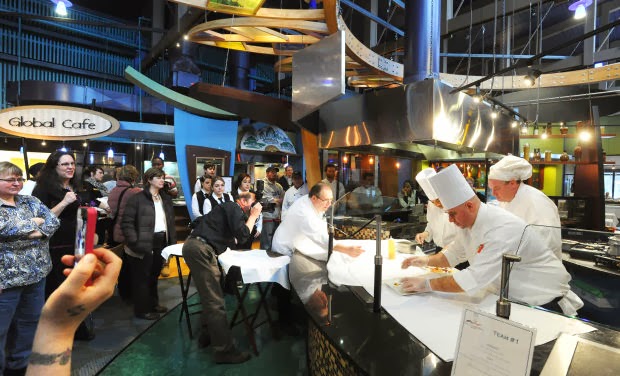 Judgement time is calling...a lot of CMC horse-power judging us! 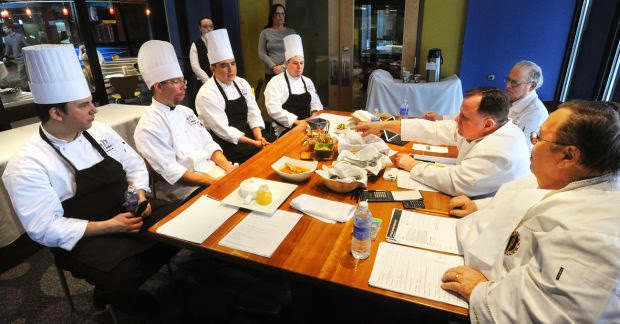 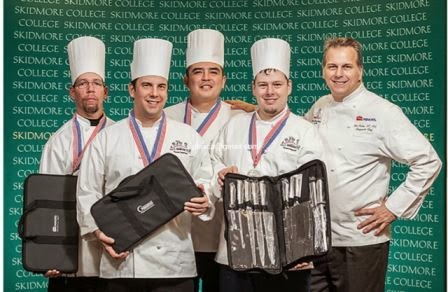 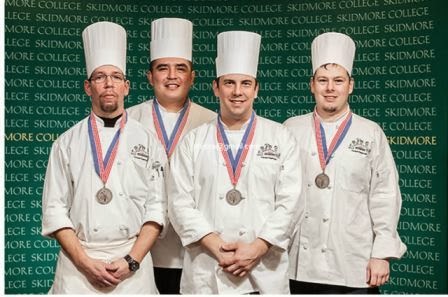 All the teams. Someone didn't get the "White Jacket" memo. 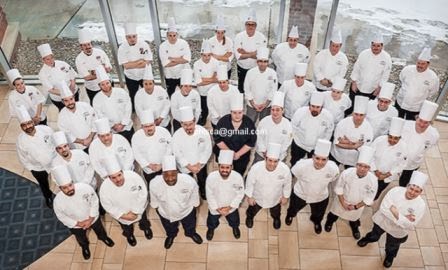 It was a humbling experience, to say the least, but wow, did we have a great time! To be surrounded by so much talent and to be considered one of the "talented" was an honor and an experience I won't soon forget. Of course, now I got the competition bug again and I've already signed up for a "K-Category" ACF competition in Boston in March of this year. This should be just as fun as this one. Will be sure to keep you posted!
Posted by Chef Bradley at 5:15 PM No comments: