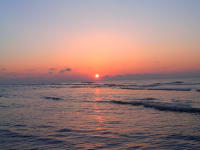 Well, just got in from Hilton Head, SC and boy, was it nice to get away! Took this pic this mornign at 7 am standing in the ocean. Was so nice and peaceful. Was well worth getting up at 5:30 am to get to the beach and take it.

Had a great spiritual weekend of fun and fellowship. I thoroughly enjoyed myself. At the same time, though, I'm glad to be home! Too many hours on the road with this trip.

Back to work tomorrow for a four day week, then off camping for four days for labor day weekend with the wife. Man, what a great life! :)

Another week has come and gone! Off to Hilton Head in the morning. Looking forward to it!

Bitch at work is at it again, she needs help! Well, I just have to be a pro and she’ll drive herself out. I look forward to that day, lemme tell ya!

Working towards my goal of moving up in the company. Boss came by again today, his tone was good. I don’t want to jinx this, so I’m not going to sike about it anymore, unless something for real happens.

Wife’s outa town, I miss her.

First day went very smoothly. Seems all the time spent getting ready really paid off. The crew was good enough to take care of everything while I was out of town, very happy about that.

One employee, possibly two, will be out if they don’t get their shit together. Between the attitudes and lack of experience, theyre both driving me batty. One of them is the “no-it-all” type who knows nothing, lol, and the other is just lazy, which is bad, too.

You try to tell the one who knows all how to do something, you get the eye rolling and attitudes crap, try to get the other one to do anything is like try to get a dead man to stand up! Lol, jeesh.

Anyway, luckily, the rest of the staff kept everything going right, and we did fine.

Big boss man and the DM came by today and thanked me for the out of town help. I appreciated that.

First day of the new action station, kinda messy, but we made it happen. I’ll make sure to get the kinks worked out before too long.

Friday nears and off to the beach for two days with the boys! Can’t wait.

Unkle_Chef
Posted by Chef Bradley at 4:47 PM No comments:

This day has come and gone seemingly without a hitch. The chef I’m helping came in on Sunday to setup for today, so that helped a bit. We were supposed to meet at the place at 5:30!, but the DB didn’t arrive until after 6:00 am! (forgot about it, dumb ass, lol)

The main reason I’m here is to help him setup his school. Shit, going on week two and he’s just not getting it. His ordering skills kinda blow, he can’t focus on more than one task (which is VERY important in this position). Not to toot my own horn, but if I wasn’t here today (and all the other days) he’d be screwed! I did 2/3 of all the menu prep and most of the delegation! (wonder what he’s getting paid, lol)…

Anyway, a couple of my corporate supervisors approached me about him, asked me what I thought. “Is he doing any better?”, “Has he shown any improvements?”, “Do you think he’s ready for this?”. The answers to all their questions were “NO! By no means is he qualified for this position.”

As true as my answers were, I hated saying them. I like the guy, I really do! He’s friendly, cordial and respectful. Not to mention in some odd way, kinda reminds me of my dad! Not my dad as he was when I was a kid, all strict and loud and shit, but the way he’s turned out, as an older man with a lot of life experiences, funny with a great sense of humor and a love of people.

Yeah, this guy’s in his early 50s, late bloomer in “The Business” as us chefs like to call it. He claims he started out in his mid forties. Who the (insert expletive here) would want to join this business in their forties man! DAMN, lol. Ah, but it’s all good. I love this business and, even as an insider, can really see its draw.

Every time I go to a restaurant, I HAVE to look into the kitchen if at all possible. It’s like I can read the language. I know what that dude’s doing with that squid, or understand what all the flames and pan banging is all about. It’s really exciting to me, as one who understands it; I can imagine how one who’s never been in the business can be attracted by that hard-to-decipher script.

As comforting as my thoughts are, I still hate to help seal his doom. Hell, I even suggested he be sent to a smaller account, perhaps as a Sous Chef or something. Anything’s better than being axed. I HATE GETTING FIRED. It’s kinda like going through a break-up with a person you thought worshiped you, a bad car wreck with no injuries and an IRS tax audit all at once, lol. But, to justify, I must admit, he’s not good for the company I represent. If he represents the company, then he represents me. Ever had a bad meal at a place where ALL your buddies say is awesome? You don’t question the restaurant, necessarily, but you may question most of your friends integrity and food tastes!

Enough of that just had to babble. I’m feeling a little bad/ guilty about solidifying their decision to replace the guy. I know they would have done it anyway; I just helped make them feel better about going through with it, in my own small way.


Posted by Chef Bradley at 8:31 PM No comments:

I’m out of town on business. This is my second week here. I worked all last week, flew home last Friday night and just flew back here again tonight (Sunday night) to work this week. Well, it’s not an entire week, only until Wednesday.

This is a fun thing, somewhat. I’m helping some poor under qualified chef open a school that is just HUGE man! It has the same amount of students as the one I work at, but all high school kids. Bigger appetites and bigger kids. You should see the amount of chow those kids consume man!

Anyway, enough of that. I’m here, in my hotel room, missing my wife horribly, typing this ( Fun stuff.

I just got here and I can’t WAIT to get home already, lol. This Thursday is the first day of school at my place and there is a crap-load of stuff left to do yet! My boss is left by himself to do it all, I feel bad for him ‘cuz there’s lots and lots to do man.

Unkle_Chef
Posted by Chef Bradley at 9:36 PM No comments:

Day in the life of a Corporate Chef

Seems most people who start the blogs I read have some sort of interesting and crazy life. Since I work for a large food service corporation that offers the food service for an elite private school, I surely qualify.